Since the publication of the report „Social Supermarkets in Europe – Investigations from a retailing perspective in selected European countries” (Holweg & Lienbacher, 2016), the authors have been continuing to do research on SSMs. They have established contacts with organisations in further European countries and have been closely following the recent start of SSMs in countries such as the UK, Sweden, or Denmark. The fact that the authors were asked to share their expertise and knowledge at numerous occasions was a confirmation of the relevance of the SSMs concept and the potential for its further development. Examples are presentations at the renowned socio-political forum in Almedalen in Sweden (Holweg & Lienbacher, 2015) and the invitation by the Lord Speaker of the British Parliament’s House of Lords in the award ceremony of UK’s first community shop (Holweg 2017).

The authors have also expanded their investigations to other regions and nations of the developed world as e.g., the United States, Canada, or Australia. To their current knowledge food banks are the predominant organizational form for redistributing unsellable food. SSMs have not been found in the way the concept is established across Europe. In case of examples for SSMs in these regions, the author would very much appreciate to receive information about their existence. This would be of tremendous help for the progress of research project. Thank you! 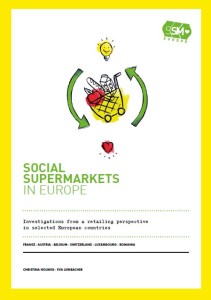